Friends of All Saints – Reports

Wine Tasting 2018
Thank you to everyone that attended for making this another very fun way to raise a few bob! We in fact raised £1100, which is excellent.
Thanks again to Helene, Will and Fred Walpole for going the extra mile to make the event successful, and to all of you for turning up and creating a brilliant atmosphere.
Hope to see you at the next one.
If anyone is interested in any wines from James, his website is:http://www.bigredwine.co.uk/
Many thanks, Kerry Walpole

Friends of Litcham All Saint’s Chairman’s report February 2013
The priority for the coming year will be to raise money towards major restoration work to the fabric of All Saints Church, which last year celebrated its 600th Anniversary.  The cost of the restoration work, currently being planned with English Heritage, is estimated to be around £150,000, and involves urgent work to the Chancel Roof, drainage and guttering, vestry, masonry and timber repairs and the tower.  Grants are expected from English Heritage and other charities, but the Church is expected to make a significant contribution.  The Friends have already raised £5000, and we would like make a further donation towards this essential work.  The Friends also donated a new St Georges flag last year for the church flag pole for the 600th year celebrations.
Membership: We have seen an influx of membership renewals and new members after a letter that was sent out late last year.  Membership is currently running at approximately 46, which produces £690 per annum plus donations.
2013 Calendars: No calendars were produced, as they were not profitable last year.  A 2014 calendar will be reviewed for possible production later this year.
Clock: After some new parts the clock has been running very well for the last 12 months, a service of the clock will be considered for later this year.
2012 Wine Tasting: This event is proving popular raising approximately £800 again last year; another event will be run later this year.
Resignation: Hannah Barratt has tendered her resignation as a trustee as she is moving away from the village.  I would like to thank Hannah for her contribution over the years to the charity.  The charity would like to appoint another trustee and would welcome applications to be considered.

And finally I would like to thank ALL the Friends for their continued support and look forward to seeing as many of them as possible in 2013.
Kerry Walpole, tel: 01328 700161.

A year of fundraising
During the year ending 30 September 2011 total income was £2801 with expenditure of  £1200 leaving a surplus of £1600. Total reserves stand at £5036.
Currently we have 44 members.  The fund raising income came from the Wine Tasting event – £793 net – and proceeds from the Litcham Village fete over 2 years of £143.
The main expenditure was spent on completing the Church Clock restoration work £432 and £300 for the installation of safety hoops on the Tower ladder.
We plan to contribute £5000 in 2011/12 towards the Church building major restoration works currently being planned.
A full set of accounts is available from the Treasurer- Tony Wilson- Tel:01328 701444 or email awilson@greenbee.net.
The AGM for the Friends will be held on sat. 28 January 2012 at 4.30pm at The Old Rectory in Litcham. If you would like to attend please contact Kerry Walpole via this email address or telephone 01328 700161 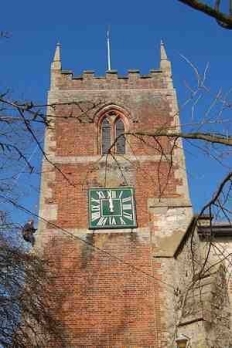 Our first project was restoration of the Church clock, an important centrepiece to the village.
Many generations over nearly 300 years have enjoyed seeing and hearing the clock, which was made by a Swaffham Blacksmith in 1725.  It is a very well made, basic design.
The hourly chime, which stopped earlier in 2008 was restored to working order by ‘The Friends’ in September 2009.The hands and two dials were restored and installed in February 2010.
Currently we are working on restoring the chimes. There are 6 bells and whilst in working order, they are in need of restoration.  We are currently getting quotes in to do the work and will report back when we have news on when the project will commence.

It’s very easy to take our surroundings for granted and to think that someone else will sort things out, however if you haven’t joined up to the friends yet, please have a think about the importance of the building for our village, past, present and future, and how nice it would be to have a working clock at the heart of our community again.  You can make a difference!
The response to our launch last December has been fantastic, we already have over 50 members! External funding is being applied for alongside our own annual memberships fees which are essential.
Two brass plaques on show inside All Saints church showing the 24 sponsored hours that helped restore the clock and dials, (Click to enlarge)