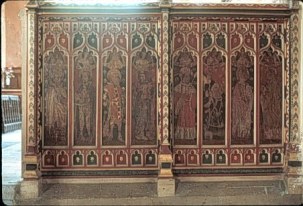 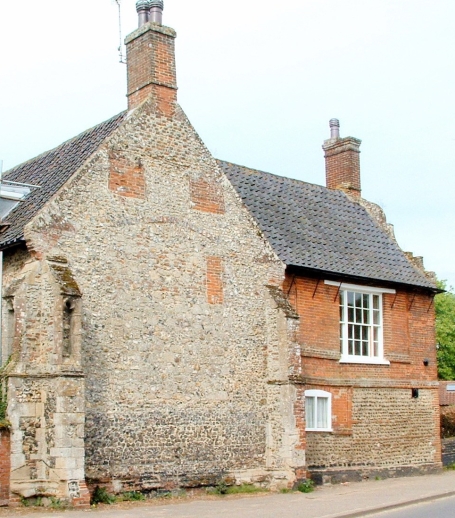 Interior. Two crown post trusses over former chapel, one octagonal with moulded capital and base and four-way bracing. Corresponding tie cambered and hollow chamfered with former notched arch braces and wall posts. Roll-moulded wall plate, four queen post trusses (2 survive) to early 17th century extension. One 16th Century bridging joist with broad chamfers and broach stops. 17th Century beams with barred and ogee stops. Part of jettied timber frame survives on north-side. Very fine staircase with tapered baluster and newel stops. Stone dressed western fireplaces. Surviving inventory of Matthew Halcott.
The Priory was used a s a house of rest for pilgrims on the road to the shrine at Walsingham, the next place of rest being at Fakenham; it may well be that Henry VIII rested here when he made his pilgrimage to Walsingham in the early part of his reign.

Archaeology: (Site No.A21) For many years the site of the Priory was believed to be the site of a Priory. There is a possibility a hermitage stood here that was occupied by Thomas Canon. More probably it is the site of the Manorial Chapel, part of the Nethered Hall Manor. Pieces of Kempstone Church were built into the Chapel in recent years. In 1979, during construction of a house inside the moat area Roman pottery was found. Later during the erection of a porch to the same house a 15th Century jug was revealed which is presently on loan to Norwich Museum. The house known as Priory Barn, built on the edge of he moat, was originally in use as a tannery. Many skeletons of oxen were found beneath the house floor.

The Bull, Public House  (LB2)
South-east corner of junction of Church St and Mileham Rd (B1145) 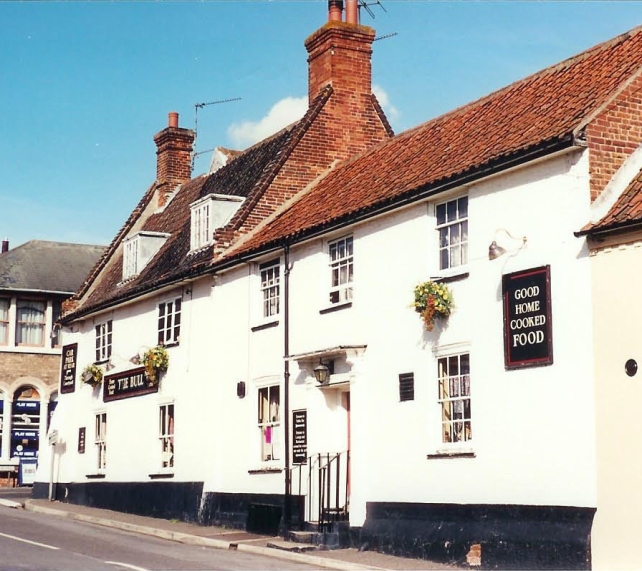 Public House, south-east corner of junction of Church Street and Mileham Road (B1145).17th Century with 18th Century former stables and an early 19th Century side extension. Rendered timber frame with flint and brick gable-ends., brick stables and colour washed brick side extension. Pantiled roofs, black to original block.
Two storeys with attic to original block. Original block of two bays with 19th Century sash windows at ground floor three-light casements above and flat headed dormers with two-light casements with glazing bars. Gable-end stacks. 19th Century side extension of three bays with four sash windows with glazing bqrs and one later 19th Century replacement. Central raised and fielded paneled door. Doorcase with reeded pilasters and the flat hood on the pair of shaped brackets. Steps with swept metal railing.Former stables form frontage along Mileham Road. Three sash windows with glazing bars at the upper floor. Three ground floor windows beyond (one blocked) with segmental heads. Dentilled cornice and carriage entrance beside main block. Beams with ogee and nicked stops in original block. Brick fireplace with plain chamfered shallow arch. Some 18th Century doors with raised and fielded panels. Jowled wall posts and butt-purlin roof to original block.
History: Petty sessions for the division of Launditch were held at the Bull Inn, on the first Wednesday on every month for the prosecution of felons. The turn of the century saw more cases referred to Dereham County Court. Probably the last case at the Bull was the inquest held over the death of an air when his Fairy Battle aircraft crashed in the Mileham area in 1938.C17 with C18 stables and early C19 side extension 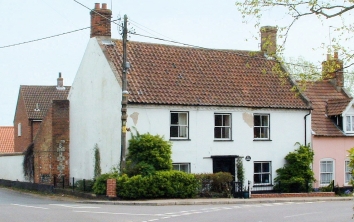 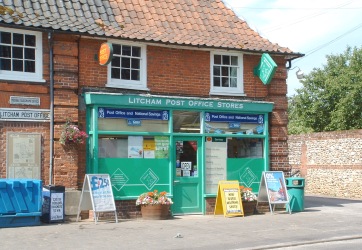 A Brief History: The Hall was built by Nicolas Raven of Harpley, in 1781. The original late Georgian building was considerably larger, having another storey and two wings which extended almost to the site of the present road. Nicolas Raven was succeeded by his cousin, Peter Raven, who was the Village doctor for many years. His son, and grandson, were both doctors in Litcham, and it is not surprising that the house became familiarly know as Pill Hall.To this day, descendants of the Raven family still call to see the house, any many of them are doctors too, continuing the family tradition.
The present appearance of the Hall dates from 1854, when it was considerably altered. The surgery remained in the left wing and some of the shelving in the dispensary has survived to this day.
Henry Keppel, Esq., who came from the celebrated naval family, purchased the Hall from the Raven family at the beginning of the 20th century. He was considered too small for the Royal Navy, weighing less than 7 stones at the age of 13; but still determined to go to sea, he joined the Merchant Navy and apparently he never lost his head for heights for it is said that even at the advanced age of 88, Mr. Keppel climbed up to inspect some repairs  on the roof, “because Rallinson cannot manage it.” Rallinson, his faithful factotum, was actually five years his junior; and apart from a single night, the old servant had never slept away from Litcham in his life.
Mr. Keppel died in 1938, in his 90th year; his younger daughter, Mabel, lived at the Hall until she died in1967, when it was purchased by Mr. Birkbeck.
The Tulip Tree in the front garden is considered to be one of the oldest and finest in the country.

Features
Gault brick and some red brick with stucco dressings and slate roofs.
Two storeys. Arched ground floor opening with entrance on curved corner flanked by triple opening with colonettes and leaf capitals.
At upper floor twin sash windows and balcony on corner with twin sash windows to west and triple sashes to south.
Balcony on three shaped brackets with decorative metal railing.
Projecting eaves with occasional brackets. South face continues with two bays in red brick with large arched entrance to workshop beside an arched sash window with glazing bars. Two twin sashes above.
West face continues with two bays with a slightly advanced gable entrance bay with arched front door and arched window above with balcony.Twin sashes to side.
Remaining houses in row not of special interest.